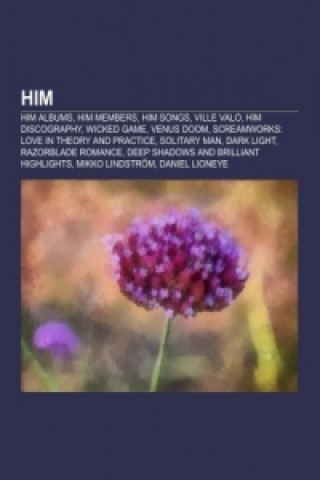 Source: Wikipedia. Pages: 26. Chapters: HIM albums, HIM members, HIM songs, Ville Valo, HIM discography, Wicked Game, Venus Doom, Screamworks: Love in Theory and Practice, Solitary Man, Dark Light, Razorblade Romance, Deep Shadows and Brilliant Highlights, Mikko Lindström, Daniel Lioneye, Love Metal Archives Vol. I, Greatest Love Songs Vol. 666, Digital Versatile Doom, Join Me in Death, The Kiss of Dawn, Mika Karppinen, In Joy and Sorrow, Wings of a Butterfly, The Sacrament, Janne Puurtinen, Killing Loneliness, Buried Alive By Love, The Funeral of Hearts, Bleed Well, Heartkiller, Gone with the Sin, Pretending, Your Sweet Six Six Six, Poison Girl, And Love Said No, Right Here in My Arms, It's All Tears, The Video Collection: 1997 2003, SWRMXS, When Love and Death Embrace, Vampire Heart. Excerpt: HIM is a Finnish rock band from Helsinki. Formed in 1991 by vocalist Ville Valo, guitarist Mikko "Linde" Lindström, and bassist Mikko "Migé" Paananen, HIM's current lineup consists of Valo, Linde, Migé, Janne "Emerson Burton" Puurtinen on keyboards and Mika Karppinen on drums. They have released seven full length albums to date, the latest, Screamworks: Love in Theory and Practice, being released February 8, 2010. On September 5, 2006, HIM's fifth studio album Dark Light was certified gold by the RIAA, making HIM the first Finnish band to have a gold album in the United States. HIM had five of their studio albums certified platinum in Finland with Razorblade Romance being certified double platinum in Finland and platinum in Germany. As "His Infernal Majesty" the band released two demos and one EP. Their first demos were "Witches and Other Night Fears" and "This Is Only the Beginning of The End", released in 1992 and 1995 respectively. The EP, 666 Ways to Love: Prologue, was released in 1996 solely in Finland. Only 1,000 copies of this album EP were sold. Recently a near mint condition copy of the bands EP was listed on eBay for around $600. The lady on the cover is said to be Valo's mother, who (according to an interview with Valo) worked in a shoe shop at the time. It was produced by Hiili Hiilesmaa, and was recorded at Finnvox Studios, MD and Peacemakers, Helsinki. HIM released their first full-length studio album, Greatest Love Songs Vol. 666, on November 20, 1997. It features covers of Chris Isaak's "Wicked Game" and Blue Öyster Cult's "(Don't Fear) The Reaper". Four singles were released from the album which was also produced by Hiili Hiilesmaa. Like the EP 666 Ways to Love: Prologue, the album was recorded at Finnvox, MD and Peacemakers in Helsinki, Finland. Guest vocals were provided by Sanna-June Hyde, and Asta Hannula on "(Don't Fear) The Reaper" and "For You", respectively. A digipak version was released in Finland, with the song "For You" moved to the fir

Why Him? Why Her?

Art Of The Book Of Life