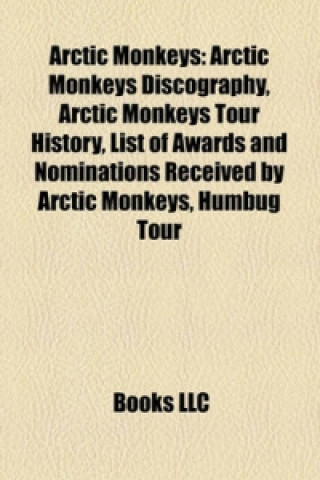 Source: Wikipedia. Pages: 27. Chapters: Arctic Monkeys albums, Arctic Monkeys members, Arctic Monkeys songs, Songs written by Alex Turner, Arctic Monkeys discography, Whatever People Say I Am, That's What I'm Not, Favourite Worst Nightmare, Arctic Monkeys tour history, Humbug, List of awards and nominations received by Arctic Monkeys, Brianstorm, Baby I'm Yours, Humbug Tour, Matt Helders, I Bet You Look Good on the Dancefloor, Fluorescent Adolescent, Leave Before the Lights Come On, When the Sun Goes Down, Andy Nicholson, The Age of the Understatement, My Mistakes Were Made for You, Teddy Picker, The View from the Afternoon, Red Right Hand, Who the Fuck Are Arctic Monkeys?, Crying Lightning, Jamie Cook, Suck It and See, Cornerstone, Fake Tales of San Francisco, Nick O'Malley, At the Apollo, Standing Next to Me, Scummy Man, My Propeller, Late Night Tales: Matt Helders, Matador, Don't Sit Down 'Cause I've Moved Your Chair, The Death Ramps. Excerpt: Arctic Monkeys are an English indie rock band. Formed in 2002 in High Green, a suburb of Sheffield, the band currently consists of Alex Turner (lead vocals, lead guitar), Jamie Cook (rhythm guitar, backing vocals), Nick O'Malley (bass guitar, backing vocals), Matt Helders (drums, percussion, backing vocals) and John Ashton as a touring member (keyboard, guitar, backing vocals). Former members include Andy Nicholson (bass guitar, backing vocals) and Glyn Jones (lead vocals, rhythm guitar). Their debut album Whatever People Say I Am, That's What I'm Not, released in early 2006, became the fastest-selling debut album in British music history, surpassing Oasis' Definitely Maybe and remains the fastest-selling debut album for a band in the UK. Since then the band have released two more albums: Favourite Worst Nightmare (2007) and Humbug (2009). The band's fourth album Suck It and See will be released on 6 June 2011. Arctic Monkeys are heralded as one of the first acts to come to the public attention via the Internet (fan-based sites rather than from the band), with commentators suggesting they represented the possibility of a change in the way in which new bands are promoted and marketed. They began rehearsing at Yellow Arch Studios in Neepsend, and played their first gig on 13 June 2003 at The Grapes in Sheffield city-centre. After a few performances in 2003 the band began to record demos at 2fly studios in Sheffield. 17 songs were demoed in all and the collection, now known as 'Beneath the Boardwalk', were burned on to CDs to give away at gigs, which were promptly file-shared amongst fans. The name 'Beneath the Boardwalk" originated when the first batch of demos were sent around. The first sender, wanting to classify the demos, named them after where he received them, the Boardwalk. Slowly as more demos were spread, they were all classified under this name. This has led to many people falsely believing that 'Beneath the Boardwalk" was an early album, or that the early

Harry Potter and the Chamber of Secrets

Harry Potter and the Philosopher's Stone