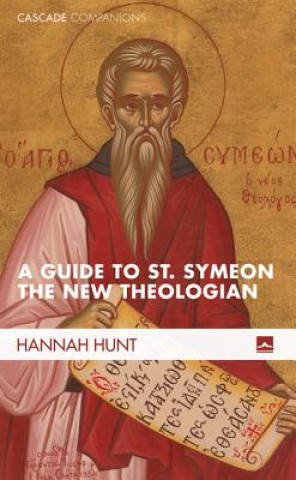 A Companion to St. Symeon the New Theologian is an accessible guide to one of the great mystical writers of the Eastern Christian tradition. His impassioned writings bring to life the monasticism of the Byzantine Empire at the end of the tenth century. Dr Hunt's succinct analysis of his life, times,.... Descrierea completă

A Companion to St. Symeon the New Theologian is an accessible guide to one of the great mystical writers of the Eastern Christian tradition. His impassioned writings bring to life the monasticism of the Byzantine Empire at the end of the tenth century. Dr Hunt's succinct analysis of his life, times, and work draws from his homilies, hymns, and other writings to show his unique contribution to the spiritual life. The book details his development as a monk (shaped by the guidance and example of the Studite monk Symeon Eulables), his conflicts with the church authorities, and his inspiration of pupils such as Nicetas Stethatos, who later wrote a biography of his master. Hunt places St. Symeon's conviction that only direct experience of God's divine light confers authority in the context of his work as an abbot and spiritual father. Other aspects of his theology--such as the importance of tears, visions of light, and obedience to one's spiritual father--are also assessed. An indication of further reading, indices, and a comprehensive glossary of unfamiliar terms make this an invaluable addition to the field, both for those studying church history or religious studies and for general Christian readers. "This is indeed an excellent companion to St. Symeon the New Theologian--informative, insightful, sensitive, and yet readily accessible, a great introduction to one of the most important spiritual writers of the Eastern Christian tradition. Hannah Hunt admirably introduces the reader to Symeon in all his different dimensions: his historical context in eleventh-century Constantinople; his writings and their genres; his place in the traditions of Eastern Christian monasticism and theology; and his legacy." --John Behr, Dean and Professor of Patristics, St. Vladimir's Orthodox Theological Seminary, Crestwood, NY "Most of Symeon's writings are inherently inspiring for Christian readers, but the significance of some ideas are easily lost in a centuries-long culture gap between a modern reader and the medieval world. Hannah Hunt's A Guide to St. Symeon the New Theologian will help scholars and lay readers alike to more fully appreciate Symeon's ideas. Hunt's thorough and concise descriptions of the social, political, and theological context of Symeon's life and works are especially illuminating. She also boldly takes on the question 'What Is Mysticism' and satisfyingly answers in the context of historical theology." --Daniel K. Griggs, Professor of Latin, Butte College, Oroville, CA Hannah Hunt is Associate Principal Lecturer in Theology and Reader in Eastern Christian Theology at Leeds Trinity University, England. She is the author of Joy-Bearing Grief (2002), Clothed in the Body (2012) and numerous chapters and articles on St. Symeon the New Theologian and other Eastern Christian theologians.

Abiding in the Indwelling Trinity

In Praise Of Love

Way of the Hermit

Holy Hesychia: The Stillness That..

Christian Healing; The Science of..

Steven Universe: End of an Era

If Cats Disappeared From The World

Rick and Morty Book of Gadgets and..

Messenger of the Heart

Art Of The Book Of Life